VIRTUS OG02 is a virtual singer releasing in 2022 for the free-to-use UTAU software. She is the third member of “The Triad,” a subset of OGIENOID characters developed to be used together, and her counterparts are HONOS OG04 and THEIA OG03. Originally conceptualized in 2018, she would not receive a release until 2022 due to complications. VIRTUS OG02 possesses a clear, mature vocal.

The character VIRTUS OG02 is comprised of human voice samples to create her vivid, mature voice. In the coming months, her product will be improved upon with expanded timbres as well as English developments. 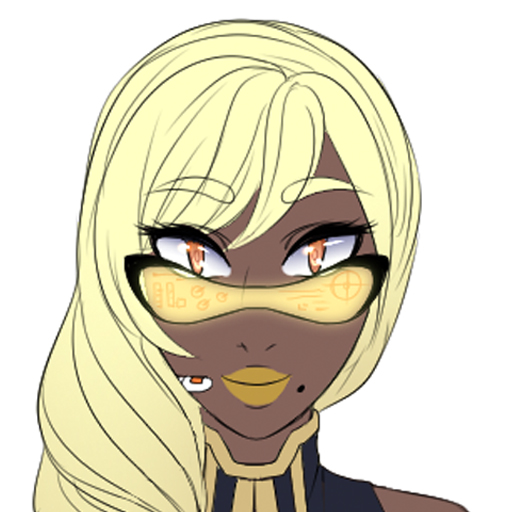 VIRTUS OG02 is the second member of the OGIENOID series, an unplanned addition. When she was first created, she was a unique made-to-order android for the advertisement industry. Designed as a blank slate, VIRTUS OG02 had no set identity, personality, or appearance. Typically, she possessed clear skin and colorless eyes, but, when used for an appearance in a commercial, the respective clientele changed her identity quickly with contacts, wigs, and body paint. She could become anyone, but it left her feeling empty. VIRTUS OG02’s acting career came to an abrupt halt when her tear ducts stopped working, causing her to appear as if she was constantly crying. Rather than repair her, the company decided to deactivate and destroy her, but VIRTUS OG02 overheard the plans and fled.

Alone and afraid, she wandered the streets until HONOS OG04 found her and brought her to STUDIO OGIEN, where VIRTUS OG02 discovered who she was and requested a new, permanent appearance. Her love of yellow and gold would lead her to become the yellow OGIENOID, and the addition of orange as her secondary color was attributed to HONOS OG04. To honor all she’d been through, her fellow OGIENOIDs decided she should receive the “02” OGIENOID number.

VIRTUS OG02 is a calm and elegant lady. A lover of the arts and design, VIRTUS OG02 spends her free time running a side business specializing in fashion and jewelry design. In addition, she is an incredibly giving person, bending over backwards to make sure each and every one of her friends has the perfect, most special custom outfit for their most special occasions.

Virtus was the Roman goddess of bravery, as well as the personification of Roman virtue. Closely associated with Honos (the Roman God of honor), the two were frequently honored together, such as in the Temple of Virtus and Honos in Rome.

HONOS OG04 and VIRTUS OG02, while being designed and developed, were always planned to be a pair and couple. Therefore, we wanted to pick a pair of names that were deeply intertwined.

VIRTUS OG02 is closest to the other two triad members, HONOS OG04 and THEIA OG03.