A vivid, lively vocal that inspires excitement in her listeners! Theia OG03 is a synthesized vocal compatible with the free-to-use UTAU program, and is available to download below. With a broad range of expressions, her voice suits pop, rock, and EDM genres among other music types.

Theia OG03 is the third member of the OGIENOID series. Theia was the second planned in the OGIENOID series. She was a made-to-order android custom purchased by the company. On her way to deliver herself to STUDIO OGIEN, she bumped into two runaway female biodroids. The three would become quick friends, and the two followed Theia to their new home. Those two biodroids would later come to be known as Honos and Virtus. Theia would soon after become the first leader of the OGIENOIDs, upon their idol debut.

Theia is a natural-born leader with a passion for helping others achieve their goals and dreams. She is the typical happy-go-lucky girl, ever optimistic and encouraging of others. She has what seems like never-ending energy levels, constantly hyper and energetic.

Theia can also be quite a flirt, unable to resist chatting up a cute girl. However, she refuses to get involved with colleagues to keep things from getting complicated.

The name Theia means "goddess" or "divine". In Greek mythology it is the name of a Titaness also referred to as Euryphaessa, meaning "wide-shining".

In the sciences, Theia is the name of a mythological planet said to have collided with Earth, resulting in the creation of its moon.

The OGIENOID tends to follow a naming pattern, using the names of Greek/Roman Gods, Goddesses, and Titans.

Theia was chosen for its lovely, feminine sound, and the relation to the character's personality. As Theia is a sweet, happy girl that acts as a ray of sunshine in her friends' lives, the name suited her to a "T".

Of all the OGIENOIDs, Theia is closest to Honos and Virtus, the other two members of her triad. Since her development began, the three were always together, so they are very comfortable in each other’s presence. Still, Theia would call herself a friend of every OGIENOID. Being their original leader, she developed many mentor-student relationships throughout her career.

The full version combines three voicebanks into one, allowing the user to plug in "↑" or "↓" into the UST from the SuffixBroker for appends. This makes all voices available to use in one UST, which helps to make editing, tuning and mixing faster and easier. 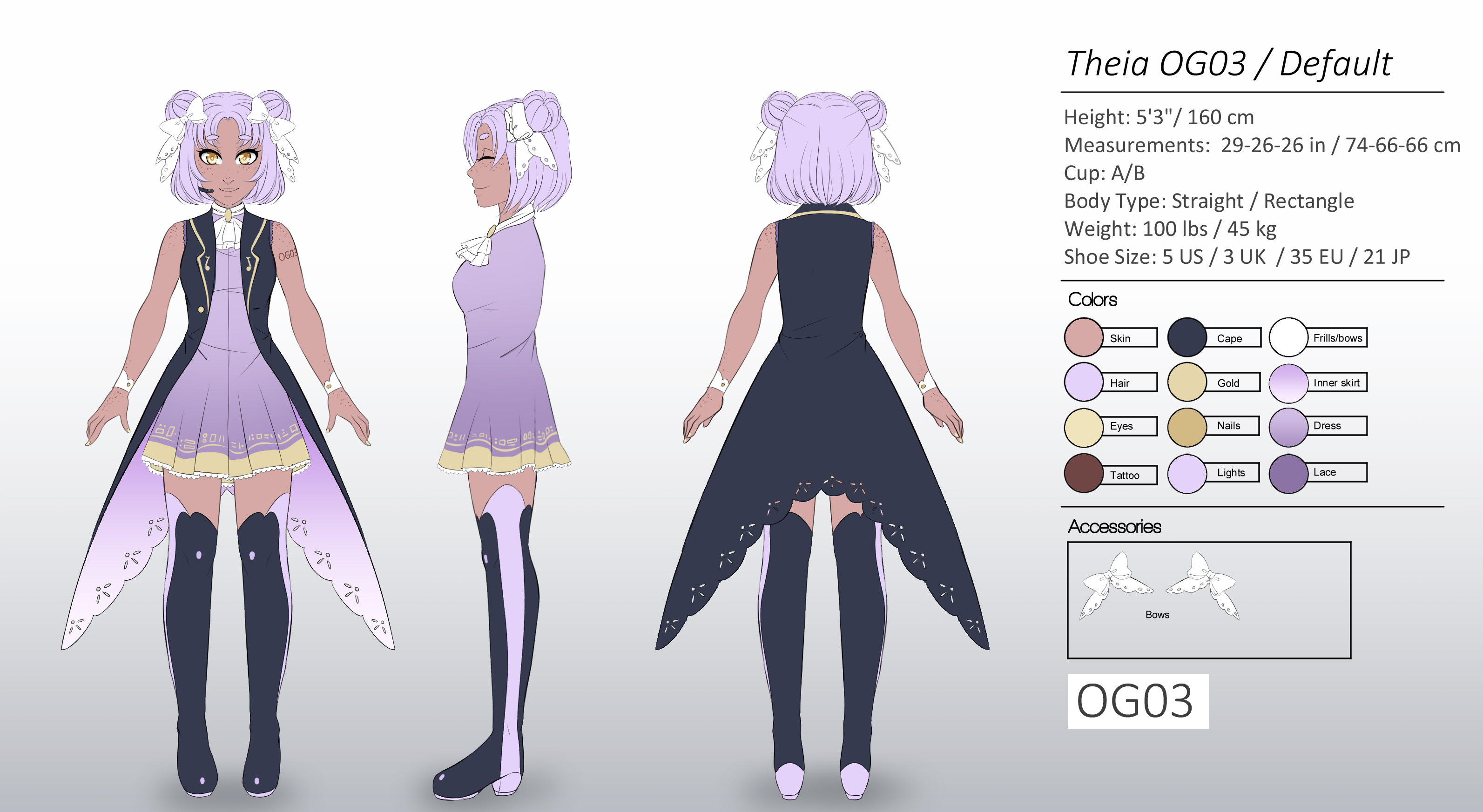